I recently served as a panelist for a “webinar on webinars,” hosted by the Global Forum on Agricultural Research (GFAR). The online event featured seven experts in managing and facilitating all types of webinars, mostly in the agricultural development space, and covered a range of discussion topics, including favorite platforms, getting the right people to attend, speaker prep, lessons learned from failure, and other golden tips for hosting webinars. Check out the recording (here and below) for a wealth of advice from those of us who have been there, done that!

The iPhone is a great tool for insect photography due to the quick shutter speed and excellent close-up/macro focus ability. Here are a few photos I’ve taken. I’m thrilled with the gorgeous detail – insects are so beautiful! Click on an image to see a larger version.

Photos have been edited with Instagram. Photo credit: Julie MacCartee.

Aflatoxin – a naturally-occurring toxin produced by a fungus that infects certain crops – is getting a lot of attention right now in the agricultural development sphere.

I worked with a small team of USAID staff and implementing partners to develop an infographic on aflatoxin. Our goal was to create an eye-catching one-pager that conveys some core messages: 1) Aflatoxin is bad for human health; 2) Aflatoxin has global economic consequences; 3) Aflatoxin is a common/widespread problem; and 4) We can do something about it! This infographic has been shared with a variety of audiences to help spark interest in the topic and elevate it as a priority in international development.

Click on the image to view a larger version:

For another take on an aflatoxin infographic, here is a nice, concise image from the International Livestock Research Institute: 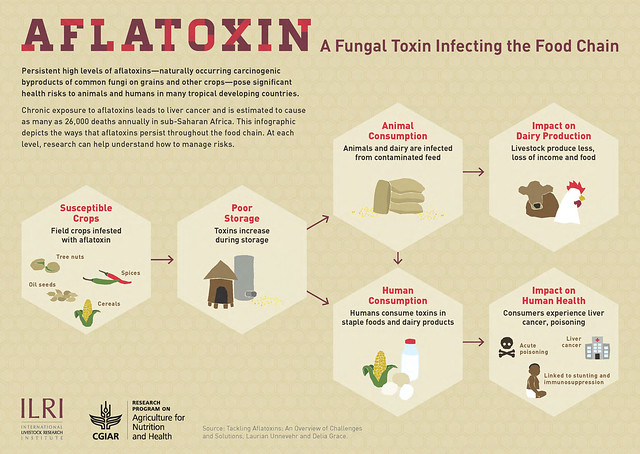 A few weeks ago, I stepped into a large gold-colored box stationed on Woodrow Wilson Plaza in Washington, DC, and came face-to-face with a young man from Afghanistan. We stood about the same height, about ten feet from one another, yet we couldn’t shake hands – because the man was actually standing in Herat, Afghanistan, in a similar box in a similar public square. We were two participants in Amar Bakshi’s art installation of “Portals” that connect people around the globe for short conversations.

For better for for worse, I happened to sign up for a portal time slot when PBS was doing interviews. I agreed to let them film my conversation and ask me a few questions afterwards. Because I knew any portion of my conversation might wind up on TV, I had a hard time relaxing and felt somewhat hindered in the topics I could broach. But I still enjoyed meeting my Afghan counterpart, who was interested in becoming a doctor. We talked about med school, public health, food, and sports.

Interested in the short PBS News Hour piece on the project? Watch the video below. My entry begins at 2:20. It’s always a weird feeling to watch myself on camera!

Here’s a transcript of my portion of the video. I am “WOMAN”:

WOMAN (ME): Yes, what do you eat typically?

AMAR BAKSHI: And that, I think, is powerful in itself for people.

WOMAN (ME): I had actually planned to maybe talk about some maybe more in- depth, tough questions.

MAN: Do you live in Washington, D.C.?

WOMAN (ME): But when you’re kind of faced in just that short moment of someone you haven’t met, it’s difficult to dive right into the meaty, kind of controversial, tough questions.

AMAR BAKSHI: People can go in there and chitchat about the weather. And often they do, because it’s hot here and there.

PREETI PARULEKAR: OK. There we go.

AMAR BAKSHI: But they can also go in and talk about — and they do — marriage, online dating, you know, freedoms, war, loss.

KHALED SALAR: Life has really changed in Afghanistan, and everything has had a really big impact on our lives. Learning about a country or a culture through TV or media is really hard, but getting to know people and getting to talk to them in person is — it’s much more effective.

PREETI PARULEKAR: For a lot of people here, sometimes, you can feel very conflicted about to what extent did we play a role in causing that?

It was a really good experience. It was really interesting to hear kind of about his life and his perceptions of the U.S. and kind of to get a feel for a real person living in Afghanistan.

MAN: And what is your favorite sport?

WOMAN (ME): I wasn’t disappointed that we talked about some of the lighter stuff, because a lot of times that’s what you actually talk to people about in daily life. I think the value in this experience is just having that moment with someone partway across the world that you absolutely wouldn’t meet otherwise.

And I think it tells you that every human on the planet has something to connect around. And so it was a pleasure to get to talk to someone that I otherwise wouldn’t meet and make that small connection, even just for a moment, to start off my day.

A farmer’s cooperative in Nepal is reaping real financial benefits from producing high-value vegetables in the off-season. Cucumbers and bitter gourd are grown in low tunnels covered in plastic, which creates a greenhouse effect, reduces temperature fluctuations, and protects the crops from weather damage. This relatively simple practice can produce significant boosts in income, due to the timing of the harvest. The farmer’s cooperative received training on this practice through Feed the Future’s Knowledge-based Integrated Sustainable Agriculture and Nutrition (KISAN) project, a five-year activity that runs from 2013-18 and is led by Winrock International. While the training is one of the successful highlights from KISAN, on a broader scale the activity aims to put established knowledge into action in order to improve agro-inputs, extension, market access, and farmer livelihoods in twenty districts in Nepal. In addition to KISAN, USAID-Nepal also has awards with the Cereal Systems Initiative for South Asia (CSISA) and the Feed the Future Innovation Lab for Integrated Pest Management, which both conduct research at local test sites to provide technologies and best practices that KISAN can bring to scale.

In March 2014, a group of USAID staff and partners (myself included) embarked on a two-day field trip to the Banke and Surkhet districts in western Nepal, where we visited field sites for the aforementioned USAID-funded activities. This trip was an addendum to the annual Feed the Future Innovation Lab Council Partners Workshop, which took place in Kathmandu. [Check out these blog post recaps of Day 1 and Day 2 of the field trip.]

I borrowed KISAN Chief of Party, Bill Collis, at one of the project’s vegetable sites for a brief interview about KISAN’s work on tunnel vegetable production. We also touched up the project’s model of collaboration with the Government of Nepal and with other Feed the Future implementing partners for spreading knowledge to farmers. Check out the video below!

Back in my days working with the Union of Concerned Scientists (UCS), I was highly tuned in to the issue of antibiotic use in animal agriculture. In short, the majority of antibiotics produced in the United States are used for livestock, and not just as a treatment for sick animals, but as a low-dose feed additive to help them gain weight. In 2007, I helped organize two Hill briefings on the Preservation of Antibiotics for Medical Treatment Act (PAMTA), which sought to ban non-therapeutic use of medically important antibiotics in raising animals for food. PAMTA was reintroduced by Louise Slaughter (the resident microbiologist in Congress) in May 2013 and holds the support of over 450 organizations, including the American Medical Association, the World Health Organization, and the National Academy of Sciences. Basically, everyone in the medical field agrees that antibiotic resistance is a major public health issue and that overuse of key antibiotics in livestock contributes to a loss of effectiveness for human use.

I haven’t kept very close track of the issue in recent years, but I was happy to see it gaining traction in the latter half of 2013. Even moreso, I was thrilled that my friend and Tufts Friedman School classmate Dawn Undurraga had the opportunity to appear in an “Animal Antibiotic Debate” on the daytime talk show The Doctors. Dawn also co-authored an Environmental Working Group report titled Superbugs Invade American Supermarkets, which demonstrates unsettling levels of antibiotic-resistance bacteria in supermarket meat.

While watching the video of this debate, I was surprised to hear Dawn’s opponent, Dr. Scott Hurd, say that the “growth promotion” use of antibiotics on the farm will “soon disappear.” That would certainly be a good thing – except that his statement was most likely based on the voluntary industry guidance that the Food and Drug Administration (FDA) released on December 11, covering the use of antibiotics in livestock feed and water. The guidance document asks pharmaceutical companies to remove growth promotion indications – such as “increased rate of weight gain” or “improved feed efficiency” – as allowable uses on the labels of animal drugs. However, it also contains this disclaimer up front:

FDA’s guidance documents, including this guidance, do not establish legally enforceable responsibilities. Instead, guidances describe the FDA’s current thinking on a topic and should be viewed only as recommendations, unless specific regulatory or statutory requirements are cited.

In other words, the livestock and pharmaceutical industries have no legal incentive to comply (although many companies have already indicated that they will take the voluntary measures). Some groups are worried that FDA’s guidance document will ultimately make the situation worse, as it will serve as a diversion from PAMTA and other legal action on the issue. It may also encourage a shift in the way antibiotic use is tracked – low-dose feed additives previously used for growth promotion might get reported as being used for illness prevention instead. I am doubtful that FDA’s guidance will result in a significant decrease in antibiotic use on livestock farms. Industry doesn’t seem worried about this guidance, but I believe that we would see vast industry push-back if a binding law was passed to truly limit low-dose antibiotics in animal feed/water.

Antibiotic resistance is very scary and needs to be addressed head-on. The Centers for Disease Control (CDC) released a report in September that clearly implicated animal antibiotic use as a main driver in the spread of resistance. See this infographic from the report:

CDC couldn’t put it more plainly: Antibiotics should only be used to treat infections. Constant, low-dose administration for growth promotion or disease prevention in animals needs to cease. How will the stakeholders proceed in 2014?